First off, Hello. It’s been a while since I’ve posted here. It’s a discipline that I’m still trying to master. Regardless, there’s some news about Mid West Music Fest 2014, and it involves me.

The lineup was announced recently, and I’m proud to inform you that I will be playing Mid West Music Fest 2014. If it’s been a while since you’ve heard some original Joshua Lauer music, check my music or videos links on the left. Lately, this site has been mostly related to Internet Marketing topics like SEO for musicians and other technical things. It’s time to shift the focus back to music and creativity.

Right after the lineup was announced, drama broke out. Festival founder Sam Brown updated his Facebook status and a plethora of comments came in. 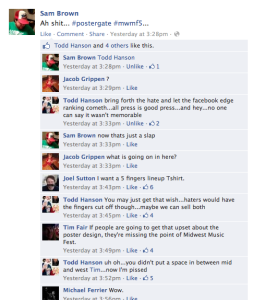 Some people are upset about the new MWMF poster… Others find it hilarious as you can see in the Facebook screenshot above. 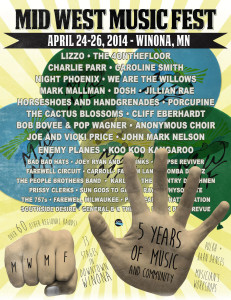 It’s pretty easy to see that the hand is blocking about a fourth of the bands in the bottom right corner of the poster. When I saw the poster, I was surprised. I contributed to the Facebook thread on Sam Brown’s status.

My Thoughts on the Poster

Regardless of what the point of MWMF is, it’s not a good idea to obfuscate information on a promotional poster. Perhaps you think that people will find more information at the website, but they might just as easily not go to the website because they get frustrated at how hard it is to read behind the fingers.

Let’s face it… the year is 2014. The Internet has been around forever. We all have attention spans that are so short that everyone likes to brag about how bad their ADD is. Most people aren’t going to take the time to figure out what the bands behind the fingers are.

The explanation from designer Todd Hanson:

no one’s trying to insult anyone here…it’s really about promoting the 5 year anniversary of the festival..

So a big hand with five fingers taking up one fourth of the poster is how MWMF wants to celebrate five years. What’s the big deal? Well, just like MWMF has its own ability to determine its branding and what it considers to be important on a poster as well as on a stage, bands have their own branding too. The poster isn’t featuring band logos, so it seems reasonable to expect that at least the featured band names would be readable. Most of them are. Except for the bottom right… It’s like the JFK assassination of bands on posters: down and to the right… back and to the left, all it takes is five fingers.

I CAN’T READ IT

Any marketer will tell you that making it hard to read the information you’re promoting is a bad idea. For almost any rule, one can come up with an exception. Is this poster the exception to the rule? Is the outrage that some have towards the poster the fuel that makes more people pay attention to MWMF5? Or is it just bad design? What do you think?

I had to figure out what the bands behind the fingers were, and after doing so, I felt it would be nice to share my findings in the form of an animated gif. Here it is:

MWMF2014 Animated Gif with the Bands Behind the Fingers

I hope to see you there!